Search Site
Menu
REQUEST A FREE DEMO 866-201-8169
Home / Blog / Mass Torts: What are they and how you can get a piece of the action: Webinar Recording

Mass Torts: What are they and how you can get a piece of the action: Webinar Recording

We’ve all read the headlines about the lucrative settlements and big fees mass tort firms earn. But there isn’t only one way to participate. You don’t need a mass torts division in your law firm to get involved. 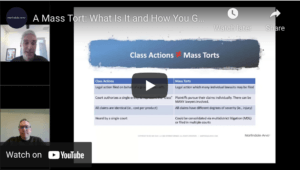 The webinar started with the basics, a definition of mass torts, including how they are different from class actions, in order to make sure everyone was on the same page. Gary and Mark covered the marketing of mass torts in detail and dug into the fact that mass tort cases are billed on a contingency fee basis. Attorneys interested in mass torts need to communicate that from the get-go to the consumers – that they pay no upfront costs – because that helps to increase intake and is one of the keys to signing up mass tort clients.

Another important aspect focuses on knowing what to look for to identify possible cases. Of course, firms can keep an eye on the market leaders in mass torts and follow in their footsteps. They also can keep a watch on the FDA’s actions. Is the FDA coming out and actually providing a warning or recalling a product? If so, that’s an indicator to pursue.

The upside for participating law firms is that many of the defendant companies don’t want the bad publicity and the impact it will have on their sales and financials so they opt to settle, often for sizable amounts. The cases are not limited to one locality or state – most often they are nationwide which opens the door for a wide range of participating firms.

The information provided on this site is not legal advice, does not constitute a lawyer referral service, and no attorney-client or confidential relationship is or should be formed by the use of this site. The attorney listings on the site are paid attorney advertisements. Your access of/to and use of this site is subject to additional Supplemental Terms.